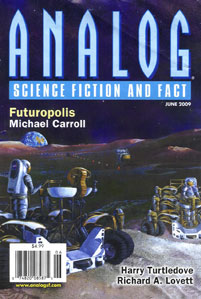 Harry Turtledove. But It Does Move.

Turtledove has written, to varying degrees of success, a lot of ‘alternate history’ of late. Lack of success tends to be related to fairly clunky alternates (civil rights movement, with identically gruesome murders, but with the white community being the victims), or with fairly minimal alternateness.

Here he has an interesting conceit – rather than a technological advancement happening earlier than in our timeline, and the impact thereof, what if Freudian analysis had been discovered earlier?

To address this he puts the psychological nous into the hands of one of Galileo Galilei’s inquisitors, and ‘treats’ the reader to be a lengthy opportunity to be a fly on the wall of several investigations. You can remove the quotation marks around treat in the previous if you like science history fiction (Analog know their readership).

You could write a subtle story about the emancipation of robots in the future (should you be happy to ignore the fact that Asimov was ploughing this furrow more than 50 years ago).

You could write a slightly less subtle story about the emancipation of robots, with a few subtle winks tipped to the read with reference to what happened in most parts of the USA in the 50s and 60s.

Or you could write a fairly unsubtle one, making very clear the links to the civil rights movement every single step of the way.

Burns chooses the latter, with a robot offered emancipation for his kind, if only he is willing to have removed the crutch of the superstitious beliefs forced upon him by his enslavers (this of course didn’t happen in the USA). But with the added twist, that in order to do so, he must be willing to risk giving up his own life, through a fairly clumsy plot device requiring one who wishes to free his kind to be evidently willing to do so either by killing one of the kind, of putting him in such a position.

Two frontiers persons, separated by several centuries, but linked by an artefact which one left behind, the other to pick up.

The earlier character is holed up in snowy American frontierland, desperately trying to keep him alive through a horribly protracted snow-storm. His crisis comes when he gets wet and has to somehow dry out and warm up before freezing to death (echoes of a classic Jack London story).

Surviving, he leaves a candleholder with a quotation from his bible in it for someone to find, in the hope that it may bring them solace. And true enough, a hardy would-be colonist on a journey of a couple of thousand years to a distant planet, has it as her keepsake from Earth. She is clearly cut off from that which she has left behind, being woken up from hypersleep once every quarter century. There is a lot of untested tech (in terms of not having been tested for 2000 years!), and similarly there are issues with both the human body and the human psyche.

She finds solace through intimate relations with a fellow passenger, but has to come to terms with losing even that. Can she use her scientific expertise to do something that will last the centuries and offer a memento of Earth?

A human is called on to help a particularly unpleasant representative of a gasbag of an alien race rescue his fellows, marooned in the low atmosphere of a gas giant.

Can the human put up with the persistant unpleasantness without causing an intergalactic incident, and when things go pear-shaped, can he use his human ingenuity to extricate everyone safely?

And can he stop the alien taking all the credit? (And to be true to Analog author naming, shouldn’t it be craig D. Lancey?)

Richard A. Lovett. Attack of the Grub Eaters.

Lovett embraces the internet, in offering a story presented through the form of an internet message board to show how an alien menace of an unusual kind can be challenged through co-operation.

Analog readership demographics being what they are, there will doubtless be a fair percentage of users wondering what an ‘internet message board’ is, from the perspective of someone who has never used the Internet. At the other end of the spectrum, should any of their grandchildren read the story, they’ll ask the same question, but from the position of knowing about social tools such as twitter, tweets, instant messaging, and facebook, but struggle with the previous generation (as in 2yr generations) of internet technology.

Humanity, through technical intervention, is essentially immortal (or uploaded). Those in physical form take the form of teenagers, for whom the whold world is their oyster. But what will humanity lose, if knowledge is not allowed to accumulate through dilettantism, and wisdom not accrue. There’s some solid science behind the story – scrub that, there’s some solid science plonked right throughout the story, often at considerable length. Great if you like your science fiction loaded with extra science!

Donald Moffitt. The Affair of the Phlegmish Master.

A lighter tone to close the issue, with a wealthy businessman with a trophy wife inspired by The Girl in the Pearl Earring to head back in time to commission a Vandermeer portrait.

Fortunately for him, time travel is quite easy, but getting what he wants is less so.

Turtledove and Hendrix the most substantial stories, Delancey, Lovett and Moffitt lighter fayre, Burns a bit creaky, but Van Pelt the one most in tune with me.