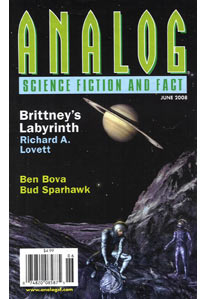 A second appearance for the middle aged man with an implanted AI who has the persona of a teenage girl. (Presumably social services have been informed), who no doubt gets into a predicament that requires getting out of.

I did give this longer shrift than the short shrift most Analog stories get. It covers another of the well established SF tropes : single man in a small space vessel who has to use his wits to survive. In this he has the help of an AI (with a male persona this time), and with a bit of scientific lateral thinking he gets through.

There’s a bit more characterisation with the pilot, and his irascible competitor who is in radio com, which got me through to the end of the story, although when you feel with a story that you can reasonably skip to the final few paras and find out how the problem was solved, without missing anything, that’s not the sign of a great story.

The emergence of AI on Earth (the first such is called Sophia) enables us to be welcomed into the galactic community of which we knew nothing. It’s the Kirtpau and they want to trade. (It transpires that only this one race are keen to trade, as, despite having an AI, our fucking up the planet is something generally frowned on by the galactic community.) One of the first fruits of this trading relationships is a deep space vessel, which a US-led team use to head off to seek mining resources from a far distant gas planet. Unfortunately, there is another race already in situ, competing for these resources – primarily matryoshka carbon (there’s a lengthy paragraph of scientific explanation for those readers who don’t know what they are but who want to know).

Once in orbit, the story dynamics picks up, as the chief scientist (who in the opening para, we find out is to get a fearsome beating for evidently messing up a major opportunity for humanity), is immediately in conflict with the ship’s captain who is keen to press on with mining in spite of the scientific reservations over what the alien race are doing, even though they are evidently in the process of changing the atmosphere.

With flashbacks which show the chief scientist chided by his daughter for not doing enough to prevent the ecological problems on Earth, he is thus encouraged to take dramatic, possibly career-ending action to avoid the bone-headed ship’s captain deploying their mining equipment, when there is a neater (duly explained) scientific opportunity to collaborate with the other alien race, rather than compete.

The story duly progresses, although the bone-headed ship’s captain is a somewhat creaky cardboard character in place to ensure the drama.

A message from the future encourages a couple of scientists to persevere with their time travel experiments, as the message is from their future selves.

A cute idea – Earl Stanley Gardner has a very strange group turn up on his doorstep : Jackie Kennedy, Ronald Regan, John W Campbel, General Macarthur and others. It transpires that alien intervention has been implicit in many of the twists and turns of human intervention, and Gardner has a key role to plan when he is visited by the alien when next he sleeps. True enough, when sleeping, he finds himself around a conference table, as expected, with his visitors seated beside him. However, they all have very different roles in life. Will this meeting result in a throw of the dice which sees humanity’s history and future twist once more?

Sam Boone is an Analog regular, so if you like these stories, you’ll be pleased. The illustration for the story, which shows a very buxom young woman being menaced by a fearsome alien, and getting her tits out, is quite offensive IMHO.

Lyon’s story the pick of the issue.