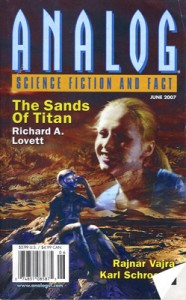 Richard A. Lovett. The Sands of Titan.

A well trodden trope (can tropes be trodden?) : a lonely spaceman (almost invariably a lone male) finds himself stranded on the moon/a moon/a remote planet, and has to use his ingenuity and scientific knowledge to extricate himself from his predicament. Will he succeed? Almost invariably, yes.

Lovett shows off (and I use ‘shows off’ deliberately) a lot of scientific knowledge about Titan, and about surviving in a sandy desert on Earth, but manages to give this latest addition to the trope mountain a little bit extra with the addition of a companion AI for the stranded spacer. A little bit extra, as opposed to a lot more extra – the AI is one Brittney, which/who has the name and persona of a early 21st century teen. (Although in my experience, the entire journey would involve the teen asking ‘are we there yet?’). The cover art illustrates this story.

Shorter story in which a young man attempts to sell the latest in cybernetic dogs to the elderly ex-seminarian Father Hagerman. Clad only in jockey shorts, the ageing gentleman remains resolute in his loyalty to his existing dog, despite its age and decrepitude. However, after playing his ace card (‘I’m Only Trying to Raise Money for College’) the deal is done, and money is exchanged for the metallic pooch, who does duly find a place on the farm.

Rajnar Vajra. On the Bubble.

A notable bit of tech used by Vajra is that of a spray-on communciations tech, which creates instant two-way AV equipment, and which enables a hospice-bound grandpop to accompany his daughter-in-law and granddaughter to the fair through a virtual means – his face displaying on the balloon she is carrying, and he having a visual and auditory feed from the balloon. Said tech also enables a new spray on tv to be installed in his bedroom (this is important later on in the story).

The ageing engineer helps his daughter-in-law out when, despite being offduty, the female cop investigates a suspicion shed on the fairground and is duly nabbed and held captive by the bad guys. Senior Bad Guy helpfully, as they tend to do, explains most of what is happening, and the engineer spots some of the tech they’re using, helped by having ‘read an article last month about these new induction triggers’ (doh!). Central Casting also supplies Henchman #1, who not only knocks the grand-daughter unconscious but gets a long way molesting her mom.

The story doesn’t really spring any surprises and is primarily an exercise in setting up a awkward situation and seeing how it is gotten out of.

Carl Frederick. A Zoo in the Jungle.

A joint Russian/US mission to the moon (cue Central Casting Russian) is mere hours ahead of a mission from ‘New Arabia’. The astro/cosmonauts are seeking the last resting place of the astronaut’s father, himself a lunar explorer who went missing two decades earlier. In addition to finding the father’s lunar buggy, the pair find more than they expect – an alien artefact. Rather than retreating and leaving this amazing find to the scientists, they play about with it, and come to a staggering conclusion regarding its purpose. It appears to offer them a chance to find out what the far future will hold – quite attractive to the American, for whom the near future has little hold on him.

There’s a sentimental ending, as he is reunited with pops (you’d have thought Frederick could have managed to work in mom appearing with some apple pie, but heigh-ho).