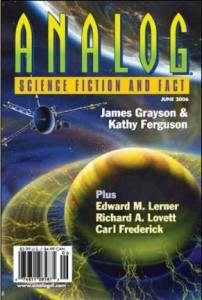 Dave, a mature space engineer/pilot is nonplussed when a politician who is opposed to the spage program comes on an inspection of an earth-orbiting station, en route to Mars. He gets the job of taking her, on a shuttle somewhat passed its best, with a co-pilot he has issues with. Of course, the journey to Mars is evidently (as you would expect) not uneventful, and there is a bigger picture, as Earth starts to get a closeup view of how vulcanicity can impact on our long-term future on Earth.

The story is quick paced, and an easy read, but has nothing in it that hasn’t appeared, with regularity, in SF over the past 50 years, although some will doubtless be enervated by the MagBeam Plasma Propulsion touted in the story, and featured in a followup science fact article. It’s an SF story written by scientists, as opposed to an SF story written by writers.

A track coach is given a means to improve his star athlete – a VR headset, which records in complete detail the experience of the person wearing it, when in record mode, and which plays back those experiences in full to anyone who puts it on in playback mode.

No stone is left unturned by Rosenkranz in his hunt for humour as the US President scuttles to his deep place of safety as aliens arrive in orbit and start taking chunks out of humanity. Excepts that it’s not us that they’re after, as we’re deemed not a threat. The big threat to the galaxy are in fact our canine companions.

Carl Frederick. The Door That Does Not Close.

A scientist and an alien visitor who is inhabiting an android body of a young boy, go in search of an ancient Roman codex. The reader is dropped straight into the story, and there isn’t a whole lot to report other than the codex is found and the scientist is concerned that the far superior knowledge of the alien visitors makes any scientific study somewhat futile.

If your preferences are conservative and you like an easy read with a bit of science thrown in, then a perfect issue. But for my money, you could read the above story outlines, not bother reading the stories, and not actually lose out anything from not having read the stories, which are all straightforward, mostly dialogue-led but lack that something special.