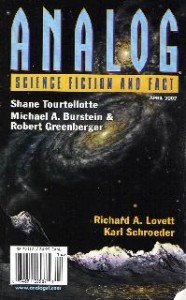 A third in a series in which criminals can have their errant ways overlayed with a mind-wipe from the brain patterns of an upstanding member of society (‘A New Man’ Oct 2003, ‘Acts of Conscience’ March 2005). Tourtellote ratches it up a notch, which is a bit of a surprise, following the very shaky premise of the previous story in which an actress wants Dr Lucinda Peale to ‘make her a lesbian’ in order to get on the sapphic casting couch of a female producer.

The story labours a little, with lab politics being the early focus of the story, as lead scientist Dr Pavel Petrusky, in a Senate hearing, proposes that the technology could be used against those guilty, or potentially guilty of ‘hate crimes’. Dr Peale has drafted her resignation note, but whilst watching the Senate hearing on TV,a ll hell breaks loose as Washington DC is reduced to radioactive rubble by the very people Dr Petrusky was highlighting.

The remainder of the story sees Dr Peale struggle with her conscience, as she is brought in by the men in dark suits. They need her expertise and want her to use the mindwipe on one terrorist caught alive. After an internal struggle, she, slightly reluctantly agrees, and leads the mindwipe, which overlays her conscience on that of the terrorist. And of course, once he awakes, the terrorist is immediately overwhelmed with remorse (if only if it were that simple, that terrorists are simply socio/psychopaths lacking a sense of remorse or conscience!)

The final sequence sees a further challenge, as the President is very keen to use her technique on a much wider range of people, and she has to decide whether it is better to oppose his system from within.

Not the subtlest of plots, but I’ll read future installments of this scientist thriller.

One of the better stories in Analog for some time. We see the opening paragraphs of an SF novel as it undergoes rewrites at the urging of an agent. Initially the story is good old-fashioned Analog scientist fiction, but the agent urges more SF. The story mutates into a story of the type more typically seen in Asimovs, full of nanotech and Singularities. A third revision sees is becoming even more cutting edge and quantum. And finally, it becomes codpiece fantasy. You takes your pick and you takes your chances.

A homeless ex-amateur scientist is annoyed to see some young guys using an anti-grav device he had invented before his life fell to pieces around him, and attempts to wrest the technology back from them, seeing it as a way of restoring a future for himself. In fact the future he restores is definitately a chance on his present.

Michael A. Burstein and Robert Greenberger. Things That Aren’t.

Lab politics raises its ugly head again, as one member of a team experimenting with virtual reality technology, decides to bump off his fellow scientists to ensure that the technology is a success for him. The technology is somewhat far-fetched – a hand-held device, with a few buttons, which enable the wielder of the device to send the person it is pointed at into an internal VR fugue in which they live out a life that a few button presses can map out. In the first instance John Kiradi suddenly finds himself on stage accepting his Nobel Prize, and we follow a special agent brought in to solve the crime, who is in fact a scientist himself.

Second part of a serialisation. The story-so-far is certainly worth reading.