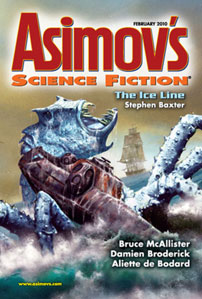 One of the ironies of Science Fiction is that sadly too-often far-future and what should be very alien societies are described with so little imagination that they are essentially contemporary western (American) 20th Century societies – whilst amongst us and next to us are societies that are quite different to that which we know, and are considerably more alien than the fictional worlds ‘created’ by writers.

Aliette de Bodard looks to China to create an alien society, alien cultures and technology – a world in which China is on a par, or better, with Western Christian society. For my money, I’d rather see Earth cultures used as inspiration to create truly alien societies, as that is true SF – but failing this, I’d much rather see the creative efforts as put in by de Bodard.

The SFnal element is that there is a technology that enables individuals to ascend to a higher plane, literally and metaphysically, as, once the students have achieved a zen-like balance of their elements, they are able to take to the skies, and create a Singularity through which they can pass, to go to a better place.

The story revolves around the Abbess of the White Horse Monastery, through whose hands many students pass. When the unthinkable happens, that one who has flown high actually returns – the matter is so serious that an Imperial Prince is quickly despatched. The same man with whom she had an affair with many years ago, which led to her being sent to the Monastery.

The crux of the story is the Wind-Blown Man of the title – why has he returned? What is his intent? He is mostly silent, and gives away little. It is the case that the Monastery is being used to remove from society those who are uncomfortable with it, and this is what he has returned to put right, as he begins his journey through the Empire.

Good to see another author being given a chance in Asimovs, and certainly the best of the few of her stories that I’ve read. I look forward to seeing more – hopefully with her moving on to even more alien landscapes,