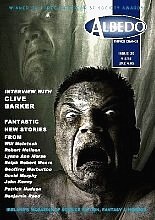 Albedo One is, according to their website, “Irelands’ leading magazine of Science Fiction, Fantasy & Horror”, and who am I to argue with that claim? Well call me Mr Picky (I’ve been called much worse), but my argument with that claim is that they’ve got the apostrophe in the wrong place.

Whereas the Australian title is digest-sized, Albedo One is A4, and has a slightly more semi-pro feel to it. Mind you, at £4.95 the cover price is anything but semi-prozine, especially considering it costs more than Interzone.

What of the fiction :

Co-incidentally McIntosh had a story in the aforementioned issue of ASIM, as well as having had a couple of stories in recent issues of Interzone. Here he creates a quite memorable setting – a dusty planet in which the words of the Masters have been inscribed on a single, humongously long wall. Many have tried to read the complete works, and failed, having (quite literally) worn themselves down in the process of trying. Gruen is the latest to attempt this task, and his daily reading is down to a fine art, in order to minimise the friction that will wear away his body.

His lifelong study is interrupted by a snail like creature, who is bereft at his daughter having died without being able to leave her message to the generations which follow, in the shape of the slime left by their type when moving. Gruen is finally persuaded to help, and having enabled the dead daughter’s message to live on, the father gives the rest of his life to help Gruen to achieve what had been thought unachievable. However, having completed his task, almost worn to the bone (blech), Gruen finally sees the futility of what the previous Masters have tried to do, and that the true message is the sand which surrounds them which is what is truly left of them.

Short psychological horror, in which a man who is mourning the loss of his wife to cancer tries to remain in contact through the graveyard, but by going through a dark place is able to return to his own life, having eschewed an easy option to join her.

Robert Neilson. The Pope, Sonny Liston and Me.

A gambling Irish pope finds his only way out of the big debts which he owes some very nasty bookies it to pluck Sonny Liston out of the past and to put him up against the current World Heavyweight champion, Alyoisus ‘Chopper’ O’Toole. If you like your Blarney laid on with a trowel, this is the stuff for you.

A graphic novelist (ie someone who draws graphic novels) is struggilng with his darker half, who has a very physical presence and whom is becoming increasingly resistant to his use of his comic books to prevent him from making it over into our world. OK, but even without being a regular reader of this kind of horror fiction it struck me as a fairly well trodden path.

Patrick Hudson. The Persistence of Memory.

An interesting idea, although the execution doesn’t really do it justice. Some somewhat creaky tech enables the elderly to have their brains and bodies re-set to a much younger age, and Simon wakes up in his mid-twenties, having lost some sixty years. Co-incidentally the age at which he tech can take him is exactly that which gives him a lot of angst as he has to come to terms with the fact that he had responsible for his girlfriend’s death only prior to that age. His mate is with him, and one thing that did jar with me was that firstly he and his mate were talking in exactly the same way, (both sounding like mid-twenties mates), and there was no exploration of how someone now back in his mid-twenties would engage with a best mate who was not old enough to be his grandfather. A subsequent turning back of the clock has similar results.

A first published story, which does rather show. A man wakes up one morning with a hangover, and whilst he was off his face yesterday, he now has another face, mounted on the back of his head. He takes this relatively well, all things considered (and somewhat unbelievably), and in popping out to the coffee shop finds out that he’s not that different from everybody else. A fairly weak idea, handled OK.

Short dark piece in which the protagonist replays, over and over, the tv footage of the sniper shot which turned the young woman he now subsequently has entered into some kind of co-dependent relationship into a wheelchair user.

David Murphy. The Wonder of Rocks.

Short two-pager in which a shadowy protagonist follows a shadowy man who performs a strange shadowy song on a shadowy beach and leaves the original man to turn his obsession onto someone else. Following on from another short short, the feeling is akin to being in a pub with a tray of lightweight maize-based cheesy nibbles and a couple of non-alcoholic drinks, when you really want to join the rest of the feckers in the bar with pints of Guinness who are eating huge plates of steak and kidney pie with chips.

Some explicit sex action for those of you who like that sort of thing. A young man has a job that involves (ahem) testing robotic sexdolls which are indistinguishable from the real thing. He gets into a bit of trouble with his boss when it comes to light that he hasn’t been making the beast with two backs with human woman, and so therefore can’t really be comparing the dolls’ performance to the real thing.

A comparison of Albedo One to the pro magazines would be unfair, but a comparison with the recently-read Andromeda Spaceways Inflight Magazine is quite appropriate. For me the latter shades Albedo in terms of its presentation and the quantity and quality of its content, although not by much. As with ASIM, the longer stories are the more telling ones. Top marks for Albedo One though in their making individual copies available via Paypal, along with online Paypal subscriptions tothe printed versions, and some online stories and a lot of reviews, on their website.