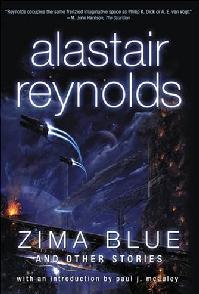 At the beginning of this month I reviewed the collection of Alastair Reynolds stories set in his Revelation Space universe, entitled ‘Galactic North’ with which I was impressed.

‘Zima Blue and Other Stories’ from Nightshade Books collects a number of Reynolds’ other stories. Fortunately for the collectors amongst us, Nightshade Books have presented their book in a very similar manner to that of the Gollancz hardbacks, enabling this to slip snugly alongside the other titles on the bookshelf.

Reynolds’ was writing from an early age, even to the extent of writing two fat space opera novels in his late teens. However, it was through a string of increasingly well-received short stories during the 1990s that he gradually built a reputation that led to his getting his first foot on the novel ladder, which he is now climbing rapidly.

The stories range from 1991 to 2006, with a couple of stories written for this volume included. One story ‘Digital to Analogue’ appears in a limited edition of this volume, but that story is fairly easily obtained from the likes of eBay and abebooks through its original appearance in the collection ‘In Dreams’, published in 1992 and edited by Kim Newman and Paul J. McAuley, the latter of whom provides a short but informative and warm introduction to this volume.

The collection opens with ‘The Real Story’, which appeared in 2002 in the Peter Crowther DAW collection ‘Moon Shots’. It’s a strong story, in which journalist Carrie Clay (who appears in the title story, see below) is on a near-future Mars which is gradually becoming a tourist-trap, the first giant steps taken by the initial landers receding into history, although safely preserved for the future. She meets up with someone who purports to be one of the crew of that first landing, but who turns out be more than that – as his shattered personality is not a multiple/schizo one, and she variously engages with the different personas of the crew as he shows her what has become of the pristine wilderness which attracted him to Mars in the first place.

She sees through these eyes what Mars is becoming, which has to lead to newer ventures, newer challenges, and much more distant horizons to be explored.

The second story is also from a Peter Crowther DAW books collection, ‘Constellations’, in which I wrote:

..(the story) shows what he can do at shorter length – for my money I much prefer him at this length than at fat space opera length. He effectively twists two threads of the story together, tying them up at the end with a flourish. It is a simple plot – a pilot awoken after a much longer spell in suspended animation. Where he is, but more importantly, how he is, is cleverly teased out, leaving the reader (if not the protagonist) with a view of a tiny speck of humanity in a very big picture.

‘Enola’, third in this volume, was Reynolds’ third sale – to Interzone, in which it appeared in 1991. It reads, in comparison to the more recent, accomplished stories, as the work of a novice writer, but it stands up reasonably well, and provides a foreshadow in its overall feel and imagery of the later Reynolds. The plot : a young girl, about whom there is a mystery, has a strange links to an intelligent missile who has to come to terms with its future in post-nuclear war future.

Written for this volume, ‘Signal to Noise’ jumps quickly into a setup that is just a bit too convenient : at the moment his colleague is about to take the first steps into an alternate/quantum Earth, Mick Leighton’s wife is killed whilst crossing the road. But in the alternate Earth his wife has escaped with only scratches : he is able to take his colleagues place in the other Earth, albeit for only a few days, in a situation which is complicated by the fact that in both realities the couple had recently separated, and in his gradually losing the bandwidth through which he is immersed in the alternate Earth. Having read a thick collection of space opera from Reynolds, and with the first two stories in this volume being of that ilk, this is a big change of pace and tone, and it rather feels a little lacking in something – but that is probably just sfnal elements, and the Big Picture, being a close and intimate portrayal of a relationship. Probably a difficult story to get placed in an SF magazine!

The next two stories have Reynolds back in full harness. ‘Hideaway’ was published in Interzone in July 2000, in which I wrote:

Far future, with humanity in dire straits. The enigmatic Waymakers have, perhaps, left one route to safety with their Waynet, which may be a Krasnikov tube. Merlin is determined to try this route using one of the remaining srynix. With the Huskers closing in, another opportunity appears – to hide. The twin planets of Ghost and Cinder however offer more than a chance to hide… Another far-future hard sf drama, similar to the author’s Galactic North. The story is only slightly spoilt by the handling of the chronological jumps, for example: ‘”There are definitely tunnels here,” Sayace said, years later.’ and ‘Several months later Merlin buckled on an immersion suit;’ which suggest that Sayace had been waiting some years to speak, and that Merlin had been waiting to buckle on his suit fo several months. The sub-plot concerning the Waynet and the syrix are not fully described, and perhaps that story element could have been left for another story, but these are minor points which barely detract from an otherwise excellent, lengthy, story. An illuminating author interview follows.

The story is continued in ‘Merlin’s Gun’ which was published in Asimovs, May 2000, of which I said:

After escaping the Huskers Merlin uses some stolen equipment to attempt to join the Waynet, which offers the potential for FTL travel, at which point the story ends. Merlin’s Gun rejoins Merlin a long, long time in the future, as he seeks to find the ultimate weapon with which to defend humanity.

A re-read, in the light of Reynold’s subsequent novels, shows this pair of stories as being ReynoldsLITE, with the Big Picture, and time and space-spanning narrative being almost too much for the short story format. The author notes after the end of each story are illuminating, and Reynolds indicated a return to the Merlin setting is likely, and that he sees these as very much him turning the volume up to ’11’. There’s certainly enough in these stories for a trilogy.

‘Angels of Ashes’ was published in Asimovs in July 1999, a year before I started reading that magazine. Again, its a baroque wonder, but a mere short scenario in what needs to be a bigger piece. Against a backdrop of a near-future hard science-inspired religion, a young novice is summoned to the death-bed of the founder of the religion. Their are dark androidy (Darth Vaderish) forces at work, and with echoes of Obi Wan and Luke, there is a dramatic shootout as a cowl is thrown back to reveal the identity of someone whose existence we had not idea about, and the pair escape the cybernetic pursuers to fight for humanity’s future.

‘Spirey and the Queen’ was published in Interzone June 1996. As Reynolds notes the story has at various times been in and out of his Revelation Space universe, finally resting outside of that milieu. It’s got internecine human warfare, with bio-modded humans in deep space in spaceships – or rather, thickships, with a thick liquid replacing oxgyen, and the crew having varying degrees of aquatic mods.

The story starts with a chase, with Spirey and his colleagues chasing a defecting ship from their side. However, it’s not quite as simple as it might be, and in landing on a small asteroid, Spirey gets to find out a lot more about the nature of the war that they are involved in, and the role of the cybercreatures doings a lot of fighting. If only Reynolds could clone himself (or write a lot quicker!) then there would be plenty of mileage in this story setting. The story is online on InfinityPlus.

The longest story in the collection is ‘Understanding Space and Time’, which appeared as a chapbook due to Reynolds being GOH at Novacan 35 in Walsall in 2006. I gave it a lengthy, and positive, review.

The final story in this edition is the title story : ‘Zima Blue’ which appeared in the Peter Crowther edited ‘Postscripts 4’ in which I said:

Not the Widescreen Space Opera of Reynold’s novels, but a more thoughtful piece which reminded me somewhat of J.G. Ballard’s ‘Vermillion Sands’ stories. However, the Ballard thing may just have to sprung to mind on account of it featuring a swimming pool (albeit a full one)! An artist who has been modifying his body towards cyborgisation, whilst working on increasing large canvases/installations, has decided to come full circle. A journalist interviews him, as he tells his story from his early days as an automated robot who cleaned a swimming pool and who had a small element of autonomous AI. Successive upgrades over hundreds of years have led him to the point where he simply wants to regress and to return to the womb/pool to live out his days. A change of pace for Reynolds, and successfully so.

As mentioned at the top of the review ‘Digital to Analogue’, which was published in 1992 and was one of the earliest published stories of Reynolds’, only appears in the limited edition of this collection. This is a shame for readers of the standard version (the one I have!), as it’s quite a departure from the norm. It’s a cyberpunkish technothriller/horror, which would most likely to be attributed to Charles Stross if you were to read and be told it was by a British writer now in his 40s and who was setting out on his writing career at that time. It’s quite enervating to read, as the alcohol/drug hazed 20something leaves a nightclub in Newcastle and finds out that certain forces are after him, and that the music that he has been listening to has had a bigger effect on him than he would have thought. It really captures the claustrophobic, pumping techno of house music and dropping a tab of e on the dancefloor. Certainly a more youthful and vigorous story than the somewhat slower-paced more reflective and middle-aged ‘Signal to Noise’ above.

An excellent complementary volume to the aforementioned Galactic North collection, showcasing a decade and a half of excellent short SF – space opera on a grand scale but with humanity very much centre stage.

One thought on “Alastair Reynolds. Zima Blue and Other Stories, Nightshade Books 2006”