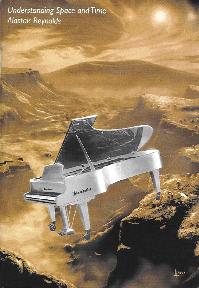 ‘Understanding Space and Time’ was published last year by Birmingham Science Fiction Group to commemorate Reynolds GoH status at Novacon 35 in Walsall in 2005. It’s a limited edition, (I’ve got #249 of 400), and they’re evidently disappearing fast, so if you want to get your hands on a copy, hie ye over to Cold Tonnage Books, or email sales@coldtonnage.com (and tell Andy I sent you!)

The cover artwork is by David A. Hardy, and is of a white grand piano on a Martian landscape if you can’t quite make it out. This is the startling opening image of the novella, in which John Renfrew, one of the last two survivors in a Martian science base sees such an artefact shimmering in the wreckage of the base, and is hopeful that this is symptomatic of the base’s AI beginning to re-boot itself. For it is a holographic entertainment, which is supplemented by an AI-programmed piano player with whom he is able to build up a relationship after his last companion slips away.

During his conversations with the piano player (whose identity I shall keep secret….) we learn of the horrific devastation unleashed on Earth, which has led Renfrew to being one of the last few humans alive.

The struggle with loneliness comes to a head when a probe arrives from Earth, but Renfrew has his hopes dashed when he realises that rather than having been sent by survivors on Earth, it is a long-delayed automatic probe which has taken the long way round. He crashes his rover, and death ensues, bringing the grim first part of the story over.

However the story continues, as it is not a final death for Renfrew, whose dessicated remains are re-created by vastly superior intelligences which land on Mars centuries later. He is able to find out more about the nature of the universe, and the long forgotten intelligences of old (a recurrent theme in Reynolds’ fiction as you would expect from someone who has spent 15 years staring down what I believe is called A Very Big Telescope), and is able to get to grips with increasingly complex theories, which makes the quantum and string theories from which he begins seem like simple maths.

We follow his journey deeper into cosmological theoretical underpinnings, as he gets closer and closer to the theoretical bedrock, and further and further away from his humanity. He is eventually faced with a choice of whether to plunge through that very final layer to find out what lies beyond, or to hold back and to retain (and very much regain) his humanity.

Well worth the read, and with a novella in the recent Science Fiction Book Club, Dozois edited ‘One Million AD’, Reynolds is very much pushing his telescope to its limits!