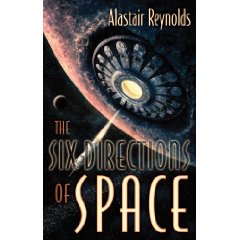 A handsome, slim, hardback from Subterranean Press, printed on high quality paper. Not a cheap volume, mind you, so if you’re on a budget, get a hold of this year’s Dozois, in which the story appears.

Reynolds posits, as he has in the past, an ancient galaxy-spanning race, now hidden in the mists of time, who have left behind the technical means to traverse space without FTL. This Infrastructure is in fact now leaking, allowing alternate branches of reality to come into contact.

The story is seen from the perspective of an Earth ruled by the Mongols, a millenia after Genghis Khan. And interesting, and possibly unique take on alternate history. The opening of the story is intriguing, although slightly weak due to the interchanges between the main protagonist and a companion not showing any signs of being any different to our contemporary language.

Ariuuna goes undercover to investigate rumoured sightings of alien vessels in the Infrastructure, and comes into conflict with political factions on the other side of the galaxy. There are some regular Reynolds tropes in the story – including torture. There are two incidents in the story, the first incorporating the murderous treatment of Ariuuna’s faithful pony (maybe soom dark Welsh valley secret from Reynolds childhood behind this!). In investigating the alien artefacts which have been found, a human from another/our reality-line is captured, and, after torture co-opted to work for the Mongol Empire, (and co-opted into another standard Reynolds’ trope – being wired very deeply into the workings of the spaceship).

Ariuuna and Muhunnad, and their torturer, embark on a journey through the Infrastructure, when a few clues from earlier in the story are explained as other realities are explored.

There’s a lot to like in the 83 pages, which will satify my Reynolds habit for some time, without having to invest the amount of time necessary to read his last two novels, currently sitting unread on my shelves.

One thought on “Alastair Reynolds. The Six Directions of Space. Subterranean Press, 2008.”