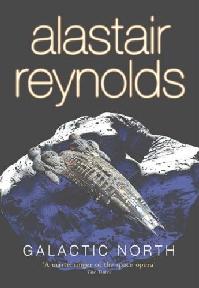 Alastair Reynolds has been taking up increasing amounts of BestSF.net bookshelf space since he moved from part-time short story writing to full-time novelist and purveyor of fat Space Opera. His main novel output is in his ‘Revelation Space’ sequence which consists of the linked novels ‘Revelation Space’, ‘Redemption Ark’ and ‘Absolution Gap’, complemented with the standalone ‘Chasm City’, and the two novellas collection in ‘Diamond Dogs/Turqoise Days’. These novels were built on an initial foundation established in a couple of short stories, and this collection usefully brings together these Revelation Space shorts, and a couple of new stories.

The collection opens with ‘Great Wall of Mars’, originally published in Spectrum SF#1 in February 2000, and which was collected in Dozois 18th Annual Collection the following year (the third Reynolds story to be Dozoised). It’s a quick re-read, although it is notable just how smoothly the characterisation, backstory, plot and action fit together. I’ll re-use a review of this story from a year or so ago:

‘Great Wall of Mars’ provides a prequel to the novels, starting the story sequence on Mars, with factional fighting amongst humans, still constrained to our solar system. The Conjoiners are humans who have used hi-tech implants to communicate closely with each other and to essentially become a hive-mind. They are trapped in their walled city on Mars (a stunning piece of imagery – in effect a two-dimensional Dyson ring, the high walls of which enable a habitable atmosphere within the circular wall). The Demarchists are humans also using implants, but who have opted to retain their individuality. It is the baseline humans are displaying the most aggressive traits. This short story introduces us, albeit briefly, to Neil Clavain, Conjoiners’ Galiana and Remontoire, and idiot-savant Felka (the description of her increasingly frantic struggle to keep the Great Wall operational is a highlight of the story). All of these characters will be with us for a couple of thousand pages of the novel sequence. Clavain is a human, whose brother callously tricks him into a mission which is intended to spark war. However, the Conjoiners have a trick up their sleeve, or, rather, deep in Mars, and the story finishes with Neil Clavain becoming Conjoined, and starting a journey that will end a long time and a long distance later, at the end of Redemption Ark.

During ‘Great Wall of Mars’, the narrative refers to previous contact between Clavain/Galiana, and Clavain’s near death on Phobos, giving some quick back history and rooting the story in a bigger picture. Interestingly, having re-read the story today, I was quite surprised at just how short it was – I had returned to the story expecting it to be much longer.

‘Glacial’ appeared in Spectrum SF#5, and was collected in both Dozois 19th and Hartwell’s Years Best SF 7. At the time I wrote:

I’ve enjoyed all of the (previous Alastair Reynolds) stories with few reservations, so it with a bit of disappointment that I have to report being slightly less enthusiastic about this story. Whereas the others are uniformly quite inventive, far-future stories, this, whilst retaining a far-future setting, comes across as a more workmanlike story – a distant planet with a secret to be found, and a mystery to be solved. Still good, mind you, but more of an Analog story than, say, an Asimovs story, if you get my drift.

The story sees Clavain, Galiana and Felka landing on a planet, the American settlement devasted by some kind of viral attack. It’s more of a who/why-dunnit story (Reynolds has a penchant for crime stories), and whilst it progresses the story-thread, primarily in bringing Felka out of her near-comatose status, it isn’t the strongest story in the collection.

‘A Spy in Europa’ was originally published in Interzone in June 1997, before I started reading that mag. It was picked up in Dozois 15th, where I read it. The story is online at the excellent InfinityPlus. It’s a tight story, focussing on factional politics in the solar system. The spy in question is a thoroughly unpleasant character, who very quickly and brutally deals with those who are unfortunate to get in his way. Having undergone some very major genetic modification to enable him to swim in the oceans of Europa, he is fleeing with the secret ‘weapon’ he came to collect. However, the subtle forces at work catch him out, and, double-crossed, he meets a watery and brutal end at the hands of genmod creatures who are grateful for that which he has, which will help them in their battle with their enemy.

There’s some marvellous imagery in the story, primarily the subterranean city, and the grim ending is well-handled, with the spy only realising at the very end what is about to happen.

‘Weather’ is the first of three new stories in this collection, which shows Reynolds’ development since the publication of the preceding stories.

Inigo is Shipmaster of the Petronel, which finds a pirate ship, the Cockatrice, tracking it. This spells doom for the crew and the manifest of people onboard in reefersleep, unless he can coax more than little bit extra from their Conjoiner C-Drive. This is a mysterious piece of equipment, with only the barest controls for non-Conjoiners to utilise, and it appears that there is insufficient to flee the pursuer. There is a metallic tang of fear in the exchanges between Inigo and the ship’s Captain Van Ness (the captain being a noble, but flawed character, with a complex relationship with his subordiante, as is often the case in Reynolds’ stories).

This initial drama resolves itself with the fortuitous destruction of the Cockatrice, from which Inigo is only eventually able to retrieve one surviving captive, a Conjoiner woman, whom the captain is very reluctant to have on board. However, she more than repays Inigo’s trust, as she is able to engage with the C-Drive to help the ship outrun a further threat. The relationship between the Conjoiner woman and Inigo is explored, one with is doomed not to develop due her inherent hive-mind setup which sees him as a very two-dimensional person.

As with the relationship between Inigo and Van Ness, her ‘sacrifice’ which involves becoming one with the existing brain already embedded in the engines, has resonances of the plague-ridden captain becoming one with his vessel in the novel sequence.

Similarly the faint chance that this may not be the end of her, and that in the future Inigo may in some way be able to attempt to get close to her again, is left open – Reynolds does appear not to like to tie loose ends too tightly together!

It’s a tight, claustrophobic story that grips from the start and doesn’t let go.

‘Dilation Sleep’ appeared in Interzone in September 1990, one of his first published stories. It’s an interesting read some 16 years later, as it foreshadows a lot of what is to come in the later stories. Awoken from reefersleep, a crew-member finds himself spookily alone on a ship with the rest of the crew still frozen, and with a need to carry out some emergency medical interventions on someone who is in danger of becoming as one with the ship.

‘Grafenwalder’s Bestiary’ is newly written for the collection, and Reynolds is able to vent full spleen with his baroque ghoulishness. The story links back to the ‘Denizens’ from ‘A Spy in Europa’, as a collector of alien specimens finds himself competing with a newly arrived collector. He covets the aquatic life forms, and when one is offered to him, he is happy to add it to his collection. However, he (and the reader) are in the dark as to his motives, and he finds out that he is not as clever as he had thought he was, and that his past has caught up with him in a quite macabre and chilling ending, as Dr Trintignant makes a re-appearance, having appeared in the novella ‘Diamond Dogs’. Having pulled himself together, Trintignant is in a position to re-assert himself as a body modification expert par excellence.

‘Nightingale’ is another new story, which goes one step further than the previous story in describing exactly what body modifications are imparted on an unfortunate team of mercenaries who find out that they are out of their depth when attempting to capture a war criminal – Colonal Brandon Jax. Readers with a far better memory than I have will doubtless remember his role in one of the Revelation Space novels, but I’ll buggered if I can remember him!

The team’s insertion into a purportedly off-line space hulk, which responds to their presence, and whose AI proves to be particuarly smart, provides an atmospheric setting, and the ending is macabre.

‘Galactic North’ rounds off the collection with a flourish. Originally published in Interzone in July 1999, it was collected in Dozois 17th, in which I wrote succinctly (this was when I was in very short summary mode) :

A raid by pirates separates Irravel and Markarian, leaving the former with a thirst for revenge that drives to to the furthest reaches of the galaxy, and beyond.

It’s a doozy of a story, starting like your average SF space opera drama in space, but gets progressively further and further away from that start, as the timeline begins to be measured in galactic rotations, as the orginal protagonists transform during the journey.

The collection ends with a couple of pages of commentary by Alastair Reynolds, making up for the lack of an introduction to the volume, which is somewhat of an ommission. It’s a handsome hardback, in the style of the previous volumes, and so is a must for anyone who has the novels – particularly with Amazon’s discounts making hardbacks more affordable than in the past. Next up for me : ‘Zima Blue and Other Stories’, the recent collection of non-Revelation Space stories from Reynolds! If you’re not familiar with the novels, then get a hold of this collection to judge whether you should invest a bit of money, and a lot of time, to familiarise yourself with the epic vistas of the Revelation Space universe.