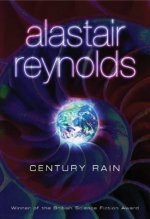 Out last year in hardback in the UK, and now just a few days in paperback in the UK, Century Rain is Alastair Reynolds fifth novel, and as I’ve read the previous four and enjoyed them (although invariably with some reservations) I took the advantage of 12hours commuting on the train over 2 days to polish off this latest 500+ page novel.

Century Rain marks a departure from his previous novels, as the others are set some distance in the far future, whereas this is more contemporary. However, he continues with his interest in nanotech human enhancement and again has groups of relatively near future humans, The Threshers and The Slashers, facing off. The Threshers are called such as they have gone up to, but not beyond, the threshold of utilising nanotech for re-engineering the human existence, and the Slashers are the descendants of the slash.dot brigade who have embrace nanotech and come out the other side, nanobots literally orbiting their heads.

And the story starts with an archaelogical dig, as he has done previously, and again features, again quite memorably, a frozen ice world – in this case, a Paris entombed by a glacier.

Similarly used before, Mars has been the setting for a conflagration caused by rival human factions, and humanity makes use of a series of interconnected wormholes left behind by a far ancient race.

And as he had done before, and most importantly, Reynolds again brings it all together in an at times mind-boggling story. But dang nab it, he still hasn’t sorted out the knack of getting the ending right.

The novel scores on previous ones in being much tighter. Whereas other stories have featured several strands throughout their length, there are just two to start with, and those are brought together relatively quickly. One slight irritant is that the story is a bit loose in who the focus is on, slipping between the perspective of the two characters just a bit too easily.

A couple of centuries hence, Earth is entombed in ice. Humanity is in reduced circumstances, the non-nano Threshers encircling the Earth in orbital environments (another Reynolds staple). They are guardian the icy waste that is Earth, and it takes some time for us to find out exactly what has happened, and why. Verity Auger is an archaelogists working in frozen Paris, when something goes badly wrong, and she is facing a tribunal. However, not everyone is whom they appear to be (another Reynolds staple).

Intriguingly the other thread is a 1959 Paris, in an Earth in which the Second World War never happened. The fascists are up to their dirty tricks again, and against this background a Private Detective is brought into a case which we realise is linked to the happenings on the other Earth. As Wendell Tyler and his colleague go about their work we are given tantalising glimpse of what may be happening, and the same happens to Verity Auger.

One issue that could have had a bit more focus was the emotional impact on both the main characters in facing up to their new realities. Auger gets some language implants and then is thrust into a Paris some centuries before she was born. Considering she was born and raised in an orbiting environment, she handles herself in the new environment with only minimal stress. Considering she is an archaeologist and not a professional spy, you would have expected some emotional and physical reactions. She is also able to sit down and have a coffee with cream and sugar, without any reference that (presumably) some years hence, even if coffee is still being drunk, cream and sugar would likely not be. Similarly, Wendell is relatively calm about discovering that he, and his entire planet, is a ‘copy’-cum-simulation of Earth.

It transpires that the Thresher faction have found, buried deep in Phobos, a wormhole link to an alternate Earth – the 1959 one. The murdered woman whom Tyler is investigating was one of them, evidently killed as she was about to head back to her Earth with some crucial intelligence. Verity Auger is persuaded to follow in her footsteps, as she is inserted behind enemy lines. When the two main protagonists meet up, the story kicks into a fast pace as they come across some very unpleasant child-sized entities.

As mentioned above, the first five hundred or so pages are quite tight, and quite excellent. The story loses pace though when the pair end up back in ‘our’ space, and there’s rather too much to-ing and fro-ing of spaceships, chases, individuals evidently murdered but who are able to come back (another Reynolds favourite).

For me, a missed opportunity was towards the end of their stay in Paris, when Auger’s temporary language skills begin to fade. This was briefly mentioned but then rather glossed over, when further tension could have been created.

The ending is pure Casablanca, although Tyler doesn’t get to mention ‘a hill of beans’ he does get to walk moodily (if not be-trilbyed) into the fog, doing the honourable thing for his dame.

However, getting to that ending is somewhat lacking in impact as the last 100-odd pages have been spent on a chase of which the result is in no doubt, – I found myself trying not to skip as I was wanting Reynolds to cut the chase, (as opposed to cut to the chase).

But the quibbles aside, an engrossing read and a page-turner. Reynolds latest novel, ‘Pushing Ice’ is out in hardback, although I’ll probably wait until next year for the paperback. (You would think Gollancz would supply review copies wouldn’t you?)