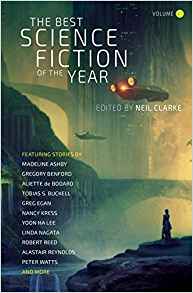 Only the third story by Wise that I’ve read, and like the previous two it’s a good one. (Her website has a list of a whole heap of small press stories going back over a decade).

The protagonist is a widower, about to wave goodbye to his children and grandchildren, who are heading off on a generation starship moored to the top of a nearby Space Elevator. He has decided that what little future he has, he wishes to spend on what little future (climate change) Earth has, staying close to his late wife. The story is his narrative, describing the final days of his life and his relationships with his children, within the framework of descriptions of current and past experiences of sunlight – those past ones relating to key moments in the love story with his wife.

It’s tender and touching, the only saving grace being that he has adopted a stray cat – if the final scene was him with an adopted stray dog, that would have had set off the waterworks.